An American At Dalian International

Has The Linchpin Been Dislodged? Lessons In Education From Abroad. 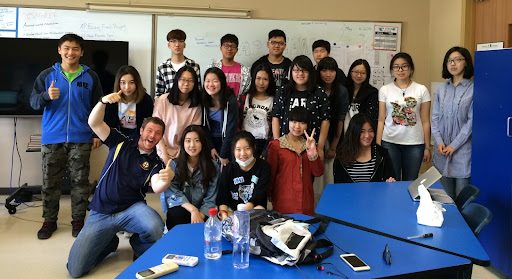 Mr. Johnson, pictured above, posing with members of the DAIS Model UN club.

When Mr. Johnson took a long weekend off to attend an International School Services (ISS) conference in Boston with his wife, Justine; he didn’t expect anything to amount from it. But that was nearly seven years ago, and in the time since Mr. Johnson has been able to add a new line to his resume, International Educator.

It was 2015 and Mr. Johnson and his wife — who had both been teaching in Frederick County for several years at this point — were itching for international experience. That’s when they discovered the ISS organization and an upcoming conference that presented an opportunity for them to learn more about teaching abroad.

“[We] took a day off, took a long weekend to go to this conference and just see what it was about. We had no intention of actually landing a job. We just wanted the experience,” Mr. Johnson said.

However, they would come to find that their resume packet as a working couple — Justine, an English as a Second Language (ESL) educator and Mr. Johnson, an experienced history and economics teacher — was highly coveted when the interview requests began to pile up and they suddenly found themselves with three job offers.

“We were a nice package deal,” Mr. Johnson said. “We ended up being second in line for a job in Switzerland. We were offered a job in Puerto Rico and the job in China.”

Despite the perks of the job offer in Switzerland — not least of which being the private ski resort adjacent to the school — the young couple hungry for an adventure ultimately decided that the far-off and unfamiliar China was more of an alluring prospect.

Mr. Johnson went into depth about his experiences at the Dalian American International School, where he taught AP Microeconomics, Finance, and Ancient & Medieval History, on top of coaching the soccer program and running a Model United Nations Club which traveled the country attending prestigious conferences. In addition to a Huamei Academy for Chinese nationals the school has an exceptionally diverse international division, with K-12 students from as far away as Brazil or Germany attending classes alongside Japanese, Korean, and Chinese peers. And while the scene is punctuated by remarkable diversity from an ethnic standpoint, there is an unseen common denominator that underlies the student populace. Most who attend Dalian — situated in the port city of the same name — are children of well-to-do factory owners or executives who’ve flocked to this burgeoning manufacturing hub of northeast China which has seen double-digit annual gross domestic product (GDP) growth since the 1990s. With a gated community of on-campus housing and amenities for students, staff, and their families — a staggering departure from the primary and secondary education facilities most are accustomed to in the United States — it’s not hard to imagine Americans mistaking the Dalian School for a quaint college town.

Ever the enthusiastic exponent of history, Mr. Johnson was keen to impart some history of Dalian, particularly the Lüshunkou District – formerly Port Arthur – which was the site of an 1894 massacre of Chinese servicemen and civilians during the First Sino-Japanese War and the prison at which perpetrators of the Boxer Rebellion were held in 1900.

As Mr. Johnson went on to describe, there are several other notable differences between the education system and educational climate in China when juxtaposed with that of the United States. The Chinese education system has a reputation for being extremely regimented. Mr. Johnson largely corroborated this notion, detailing how most students attend two tutoring sessions a day immediately preceding and following normal school hours and that some even attend Saturday school for study hall or standardized exam preparations.

“The study culture there is very different, the rigor was insane,” Mr. Johnson said.

Contrary to what is often portrayed in popular media, Mr. Johnson can confirm that students in China place as much emphasis upon their academics as they do their social lives and partake in the same experiences any American student would deem quintessential. The most glaring difference though, Mr. Johnson said, was the degree to which parent involvement and oversight played a role in children’s education.

According to him, parental support is the driving force behind the education system and the study culture in China. The Chinese government’s expenditure on education amounts to around 4% of national GDP according to UNICEF statistics from 2020. This figure falls below the 4.9% average total public expenditure on education for the 35 countries reporting statistics to the Organization for Economic Co-operation and Development (OECD), and critically, below countries like the United States, which sits at number four on the list at 6.1%. Nonetheless, China far outperforms everyone when it comes to testing scores. Its students rank No. 1 in all three of the subjects tested on the OECD Programme for International Student Assessment (PISA), reading, science, and mathematics, leading many experts to contend that the Chinese education system is without parallel. The question remains then as to what other factors are contributing to China’s success on the education front besides spending, and perhaps Mr. Johnson is correct in his assessment that parental involvement is the linchpin.

Though he stresses that the education system in the US would benefit from more parental involvement, he also concludes that, “There’s got to be a better mixture.” While the US has perhaps underestimated the importance of parental involvement, countries like China have fostered a culture in which, “Parent support is so intrusive that I don’t think it allows students to grow individually.”

The leave of absence Mr. Johnson and his wife Justine were granted through FCPS allowed them to teach abroad for up to two years, but the couple decided to return in the summer of 2016, due in part to the severe asthma Mr. Johnson developed as a result of the stifling air quality in an industrial city of more than five million people.

When asked how his experience in China impacted his teaching style when he returned to the US, Mr. Johnson said it, “Made me more aware of language barriers…” and that the diversity he was exposed to gave him a better “ability to build relationships with students regardless of their background.”

Mr. Johnson returned to his previous job at Frederick High in the fall of 2016 before transferring to Brunswick High in 2020, where he currently teaches history courses and advises the Model UN Club — serving the same versatile role he always has, only now equipped with invaluable insights from a school community 7,000 miles away.