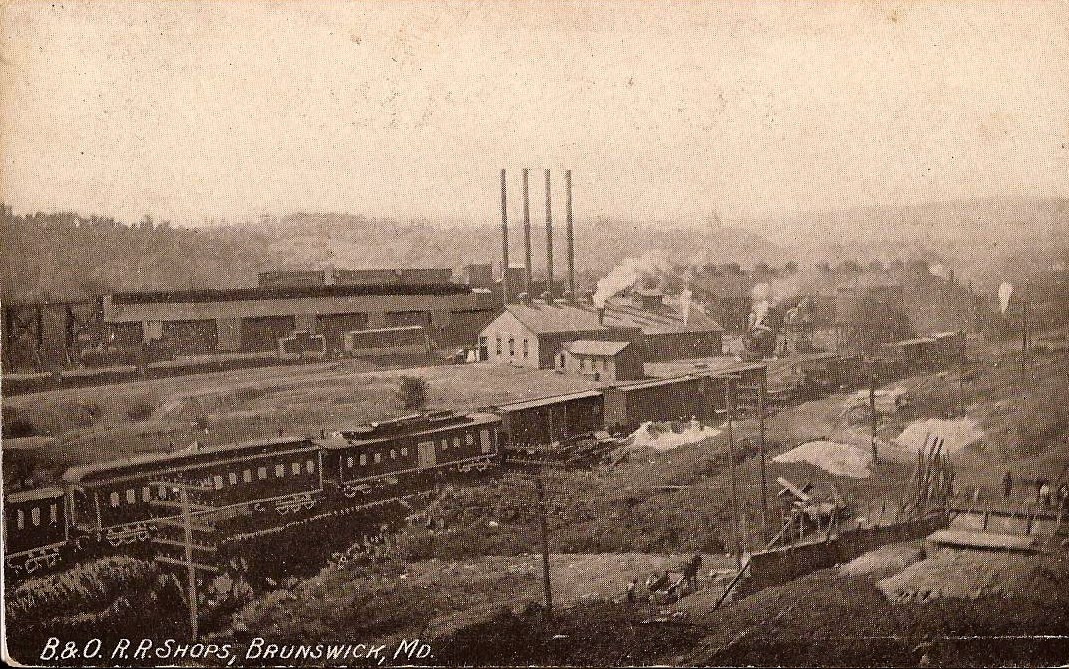 B&O Railroad Shops in Brunswick, MD from a 1908 Postcard from The Harmon Cigar Store

B&O Railroad Shops in Brunswick, MD from a 1908 Postcard from The Harmon Cigar Store

How Advancements In Technology Affects Us Today

One might think of trains and canals as primitive technology—lost to the centuries past. However, not so long ago, they were the height of technological advancement, and nothing was faster than a train. Canals had been created and used for transportation and travel for centuries, until the trains began to be widely used for the same purpose. As people came to realize the latter was much faster, canals began to slowly fade out, putting many smaller cargo and boating travel companies out of commission. This caused some competition between the canal and the railways. Brunswick and Point of Rocks played a part in this struggle on a local scale, known as the Battle between the C&O Canal and the B&O Railroad.

“The biggest clash between the Canal and the railroad came in the narrow right-of-way where the Potomac River cuts through a mountain ridge at Point of Rocks, MD. Both projects were vying for this narrow passage, and a bitter four-year legal battle delayed both from continuing until 1832. The courts ruled in favor of the Canal, but the railroad still reached Cumberland first—a full eight years before the Canal.” (C&O Canal Trust) The Canal attempted to hold its own by transporting goods like coal and flour to Georgetown and Washington D.C., but the railway had a one-up because they could transport things to a wider range of places on land like the Midwest, where there is little flowing water. Not to mention the speed with which the railroad delivered its people and cargo quickly overpowered the C&O Canal.

Brunswick was in the heart of all of this—changing with the times to adapt. Built from a ferry crossing on the Potomac River, and rising into a small settlement through the canal, Brunswick populated and picked up once the railway was built into the town. With a constant stream of passengers and cargo, business began to flow and Brunswick thrived as the ways of the canals slowly faded. Such a small piece of history, yet it changed so much about the system of transportation, trade and travel in the local area; and Brunswick had a front row seat, even being built out of the rise of the railroads over the canals. For something so tucked away in the corners of history, it affected a great deal. Even today, the railway plays an important role in the identity of Brunswick and its citizens, our local high school even adopting the mascot of the Railroader.