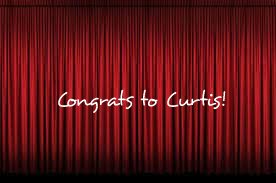 The Poet That Didn't Even Know It

Curtis Kemtchouang is a freshman at Brunswick High School.

He placed 2nd place, so in addition to moving on to the Maryland Poetry Out Loud State Competition, he won $200!

The state competition aired virtually on March 10th and Curtis enjoyed his experience which all started with a class competition in Mrs. Graziano’s first  block class.

Besides poetry, memorization, and having a strong voice—Curtis likes to play video games and recently started to learn how to code. He thinks coding is cool and wants to pursue coding as a profession. Before that, he wanted to be a commercial airline pilot. Curtis’ everyday life is fascinating. He stays home a lot so he can play video games and do his homework. He and his family go out once in a while to enjoy themselves. But recently, something very interesting occurred in Curtis’s life. He was a part of the Poetry Out Loud competition. And he ended up making it all the way to the state competition!

When he was interviewed by Andrew Green, who also competed against him and placed second for Brunswick High, behind Curtis, he said, “I am really excited and surprised. To be honest, I wasn’t expecting it at all. I started this entire thing not knowing that I would end up going to regionals in the first place, but here I am competing for states. But I surely am excited for what is to come.” The competition is hard, you have to memorize a poem for the first round then you go on to face the few people in your school who made it through the you go on to regionals then state then nationals. He had to memorize three poems, then recite them in front of a crowd.

I wasn’t expecting it at all. I started this entire thing not knowing that I would end up going to regionals in the first place, but here I am competing for states. But I surely am excited for what is to come.”

At the end of the interview he wanted to tell the people who stay in their comfort zone all the time to try something new because before the competition he didn’t find anything about ELA interesting and that before he did the competition he would have never have imagined doing it at all.

So to all those people out there who stay in their comfort zone, try something new, the outcome might just surprise you.