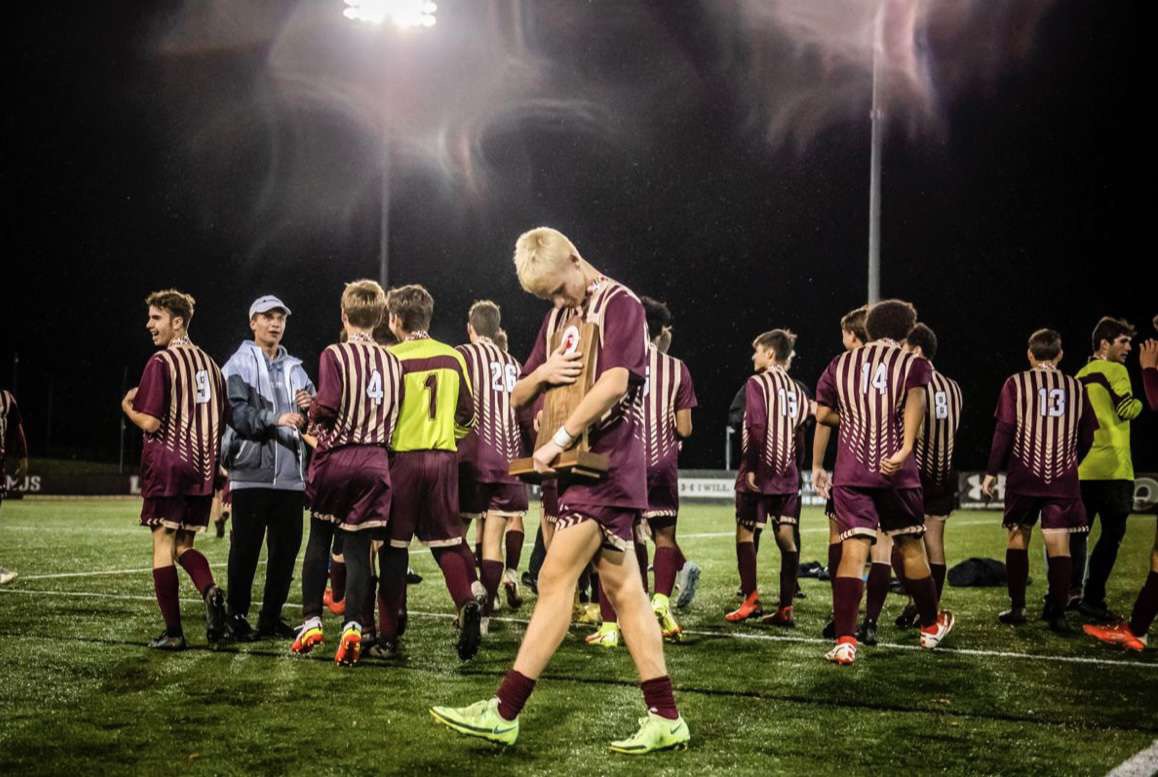 If there is one word to describe this year’s soccer season for the Brunswick Railroaders boys’ soccer team, it’s domination! To have both teams not only make a deep run in the playoffs but make it to the big stage in Loyola is huge for Brunswick. The boys’ goalies had over 200 saves and players with over 20 goals and assists. Through all the controversial close calls, Brunswick was still able to come out on top.

As the season was winding down for the boys, the tension in the air was rising for playoff hopes and potentially a deep run. Prospects like Logan (Larry) Malone and Finn McGannon became feared in the 1A standings for their skills with the ball. With Finn having 180 saves at the end of the season with a save percentage of over 90% and Logan having 26 goals at season’s end, they were in a league of their own. Not to mention the core defensive line of Jackson Acker, Brendan Walsh, Jack Willard, and Kam Harris, and lastly the amazing coaching from head coach Shawn Baker and assistant coaches Kenny and Matt Putnam, the team looked unstoppable.

“Practice was a day to day experience where we got to grow and get better together and have fun doing it.” – Striker Ryan Domathoti

Practice for the boys consisted of warm-ups followed by passing drills, and leading into other activities such as shooting drills, possession drills, and lots of running. It wasn’t easy that’s for sure. Head coach Shawn Baker wanted these boys in the best shape performing to the best of their ability because he knew the potential we had. Striker Ryan Domathoti said it best, claiming, “practice was a day to day experience where we got to grow and get better together and have fun doing it.” The boys would need it though in order to face the long and grueling challenge of the playoff season.

Tension started to rise during the last regular season game after taking a tough loss in South Carroll, the boys were determined to bounce back for the playoffs. Game one against Boonsboro came and went with a 5-0 win on home ground. With this the regional final was set, and who better to play none other than our rivals—Clear Spring. After beating them twice during the regular season, there was a precedent for victory yet a difficult attempt to be made with unhappy opponents and fans anxious to redeem themselves. In the closing minutes, our star striker Logan “Larry” Malone scored the game winning goal, securing the regional championship and keeping our playoff hopes alive! Our fate was set, we would play who else, but our old friends: South Carroll.

Little did we know this would be the most aggressive game of the entire season. It looked more like an American Football game than a soccer game. Body hits left and right from both teams. Brunswick was down 1-0 at the end of the first half. Things looked grim for the hometown heroes as it had seemed South Carroll had the advantage over us. But something clicked in the second half, the team started to connect passes and plays were being developed. After an amazing sequence of plays between midfielder Will Burton and striker Logan Malone, Will was able to score giving Brunswick a 1-0 lead.

After the goal it became a defensive game for Brunswick. Freshman, Sam Verosto, stepped in after midfielder, Ricky Cicmanec, got a yellow card forcing him off the field. Sam went on to have one of his best games a player can have, let alone in an important match like this one. The task certainly wasn’t easy, especially with strikers, Ryan Domathoti and Logan Malone, and midfielder, Will Burton, coming out due to injury in the closing minutes. But the team held on to secure the 1-0 win over South Carroll moving us into the semifinals against Allegany.

The state semifinal game against Allegany started off strong with an early goal from Logan Malone. Allegany quickly responded however tying the game up 1-1. It was a constant battle back and forth with both teams but after a great pass from Logan, striker Ryan Domathoti was able to score the game winning goal for Brunswick, giving them a 2-1 win over Allegany. The players stormed onto the field congratulating their fellow teammates. The stage was set for the 1A state finals. Brunswick versus Fallston at Loyola University, the big game everyone was looking forward to and worked so hard to get to.

The game against Fallston had a feeling like no other. It felt more professional than any game leading up to this point. The boys took a charter bus to Loyola University to play. This was it, the game they have been looking forward to their entire lives. The game felt real, the boys went into professional locker rooms to prepare. They had the professional walkout under the bleachers with the official tradition where the two teams stand side by side looking at the fans. The boys warmed up, got mentally ready, got their starters on the field and a blow of the whistle, the game was underway.

Things looked grim for the hometown heroes as they were getting outplayed by Fallston. Things got worse around halfway through the first half when Fallston put in a beautiful goal against Brunswick giving them a 1-0 lead. However things would soon change when striker Logan Malone responded tying the game up 1-1. As the clock ran down things got more intense and with that final whistle, this game was going into overtime.

Overtime began and the tension was high. Hearts were beating out of chests for both Brunswick and Fallston players and spectators. Hearts were beating out of chests for everyone there. The tension was so high there no one was in their seats. Fans cheering at the top of their lungs. A play started to develop, Kam Harris had delivered on of the best through balls ever to Logan Malone. He was in, all he had to do was put this ball away!

And there it was, Larry had scored the goal. I remember thinking to myself. “That’s going in. THAT’S GOING IN!” The boys on the stands immediately jumped out of the stands and rushed onto the field. The screams of Brunswick fans echoed as all we could think was we just won! Goalie Murphy Nichols said it best claiming, “it all felt like a blur. The cheering, the knee slides, the pure sense of euphoria. It’s a feeling like no other. To be on top of the world as champions.”

After the celebrations on the field, the boys lined up for the trophy presentation. Rows of first place medals were aligned and at the end sat the true prize, the championship trophy. The medals were passed and the boys got their big team picture. These guys were more than just another soccer team, they were a family. A band of brothers who looked after each other, helped each other get through the season. We grew as a team because of it. Talking to striker Logan (Larry) Malone, he claims that we can win the championship again next year because “most of the team is returners and the core line is still playing and improving every day.” Logan also claimed a reason this team worked so well was because  of “our team chemistry after playing together for many many years.” No matter what happens though, the 2022 Brunswick Railroaders boys soccer team would go down in Brunswick history as the 2021 1A State Champions and one of the best teams to come through Brunswick High School.

“Most of the team is returners and the core line is still playing and improving every day. ” – Striker Logan Malone

During the offseason, players are making strides to make the dream of winning again a reality. Midfielder Ricky Cicmanec as well as other players such as CDM Kam Harris, Logan Malone, and midfielder Will Burton have been going to local fields to work on passing, scoring, and overall growing as a team. Videographer Ethan Genos (@ethanjohnmedia) recently filmed a practice montage of Ricky Cicmanec practicing in the off season. It’s only a matter of time before the boys are back for the 2022 1A High School Soccer Season.