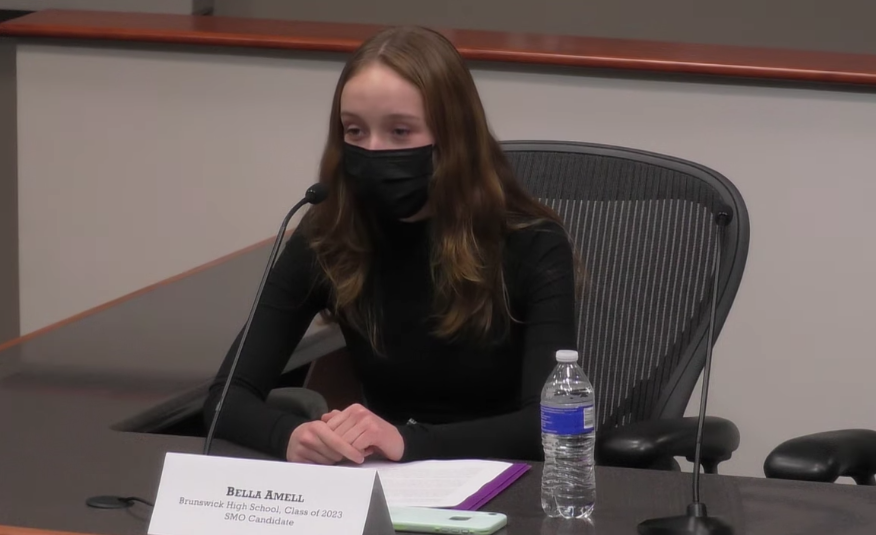 Bringing Recognition To The Smallest High School In The County.

At the end of each year, students prepare to run for FCPS’s Student Member of the Board election, more commonly referred to as SMOB. The SMOB brings a student’s perspective on issues at Board of Education meetings as well as represents a diverse range of students’ views on these issues. Running to take on the responsibility of advocating for the best interest of all FCPS students in the 2022-2023 school year is Brunswick High School’s very own—Bella Amell.

Bella Amell, currently a junior at Brunswick High School, is very active in her school and community. Bella is a starter on the varsity field hockey team and she is also casted to play Cinderella in BHStage’s production of Rodgers and Hammerstein’s Cinderella. Currently, Bella is serving as vice-president of Student Government Association (SGA), junior class president, president of Model United Nations (MUN), and vice-president of National Honors Society. Outside of school, Bella sings with the Frederick Children’s Chorus and is the chair of the Brunswick Youth Advisory Council. To get a deeper look into Bella’s candidacy, I asked her a few questions that she was able to answer in great detail.

What influenced you to run for Student Member Of the Board?

This is Bella’s favorite question that she gets asked lately. Bella first voted for SMOB in 6th grade for whichever girl was running because she wanted a girl to win. She has always known she wanted to run for SMOB due to always being involved in school advocacy groups or anything where students can get more involved in local government. Bella is very passionate about the equality throughout FCPS and how “equality in education should not be determined by zip code.”

Equality in education should not be determined by zip code.”

If elected, what are your main goals as SMOB?

Bella’s entire candidacy is centered around four different topics. Her first topic is mental health, which was a popular topic among all of the candidates. Bringing universal therapy access to all students in FCPS, brought to light due to the stress caused by virtual learning during the pandemic. Another topic Bella will address is diversity and inclusion, especially by advocating for a SMOB advisory council. With the creation of this council, Bella believes that all students will be more fairly represented by having more than one student’s voice on the Board of Education. Bella also strives to create College and Career readiness programs that will better prepare students for the future. She believes that an updated curriculum is crucial in 21st century learning. Bella also aims for sustainability in all FCPS schools. She says, “climate change is very real and its presence has already impacted our schools.” Lastly, Bella will advocate for voting rights for our Student Member of the Board. Currently, SMOB is able to vote, however their vote is not counted. She believes that SMOB will be able to make the ambitious changes that are wanted with voting rights.

Climate change is very real and its presence has already impacted our schools.”

What are you most passionate about related to your candidacy?

Bella is extremely passionate about the people who support her and the people she has met throughout this experience. She enjoys when people reach out to her to ask questions and express concerns they’d like to see addressed. She says that this has been a very rewarding experience, while also being one of the most intense things she’s ever done. During her candidacy, Bella has learned to use rude comments to motivate her. Bella says, “If I can make a difference and make a meaningful impact in at least one student life that’s important and my platform definitely has the capability to change a lot of students’ lives.”

If you are elected, what will be your first actions as SMOB?

The first thing Bella will be doing is making a SMOB advisory council. She recognizes the SMOB advisory council in other counties, saying that they work really well, and makes it apparent that the council is a great way to incorporate everybody. She will then begin the fight for SMOB voting rights. Bella says that she does not believe that voting rights will be granted the year that she is the SMOB, however she sees it being possible in the 2023-2024 school year. She mentions that there has been a bill in the Maryland House that has died in committee twice, but she would really like to push it further in her time in office. Bella will also tackle the mental health forefront, as it was such an important part of every single candidate’s campaign.

What does being SMOB mean to you?

Bella says that the most important role of SMOB is to connect with students and make sure that viewpoints from each student are accurately represented. Bella acknowledges that due to COVID it has been difficult to visit students at various schools like in previous years. She says that she tried her best to visit virtually with as many schools as possible, but she says that it will be extremely beneficial when she is able to go into different schools and, “get a hands-on feel, talk to real students, validate their experiences, and see what can be done especially with those resource disparities […] It means being an advocate, it means that yes, you’re going to have some parents that are mad and you’re going to have some students that don’t agree with you. But, it’s about advocating for the things a lot of people believe that a lot of people in our schools don’t have.”